A young composer at Mills College in the 1980s, Larry Polansky met Lou Harrison when the elder composer was awarded a visiting chair in composition. It was a homecoming of sorts for Harrison, who had been an accompanist and composer for the Mills dance department nearly fifty years earlier. Along with gamelan musician Jody Diamond and Harrison’s partner Bill Colvig, Polansky and Harrison had spaghetti dinner every Tuesday, where the conversation could often drift to shop talk about microtonality and gamelan forms. While at Mills, Harrison was approached by James Broughton to score his new film, Scattered Remains.

A mainstay of the San Francisco beat arts scene, Broughton had first met Harrison at one of the composer’s famous percussion concerts in the early 1940s. Harrison saw Broughton’s controversial experimental film The Bed when it brought a lively, anarchic celebration of sexual freedom to underground cinemas during 1967’s Summer of Love, and they renewed their acquaintance at the Poetry Center at San Francisco State. Harrison was a poet himself and found a kindred aesthetic in Broughton’s wryly irreverent and sexually open verse. Nuptiae (1973) was the first of three films that Harrison scored for Broughton. Scattered Remains is a characteristically quirky film that features Broughton speaking his poetry in between scenes with Harrison’s score, similar to the way that Harrison sometimes read his poetry in between musical performances. Broughton wrote a poem in honor of Harrison:

A hail and a hallow to harmonious Lou 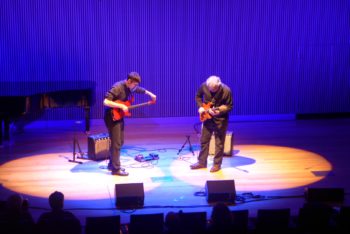 Having already experienced the tendency of filmmakers to re-edit his finished score, Harrison provided a cyclic melody over a mesmerizing percussion and harpsichord ostinato, whose atmosphere would survive arbitrary edits. It was perhaps the closest he ever came to then-popular minimalism, a style Harrison sympathized with and which influenced his students of the time, including Daniel Schmidt, Paul Dresher, Janice Giteck, and Polansky. When he adapted the score as an independent composition, he titled it Air for the Poet in honor of Broughton. Polansky and Giacomo Fiore, an authority on Harrison’s music for refretted guitars, have arranged this lyrical piece for two guitars in Harrison’s preferred just intonation, to be performed on March 14 in co-presentation with Tuesdays @ Monk Space. MicroFest will also be screening the original film on the April 21 concert at UCLA.

Singing Strings of the East and West
March 5th, 2022 | @ The Pico Union Project

Clusters of Clock and Clouds
January 2022