wasteLAnd premieres Wolfgang v. Schweinitz’s Cantata, or You are the star in God’s eye

WasteLAnd, a Los Angeles-based concert series featuring avant-garde and experimental music, local performers, living composers, and with an emphasis on recent and under-performed compositions, presents the world premiere of German just intonation pioneer and California transplant, Wolfgang von Schweinitz’s Cantata, or You are the star in God’s eye. Originally composed as a radio piece, this will be the first live performance of the expansive 80-minute work which features the work of the Austrian poet Friederike Mayröcker. Since moving to California to teach at CalArts in 2007, Wolfgang has devoted himself to the development of his students and collaborative research with them, as well as their role in the music scene in Southern California. Continuing that tradition, he has reworked his original Kantate for a larger ensemble of personally chosen musicians to make a live performance possible, while also weaving the results of his long-term collaborative research into this new version. Featuring: Stephanie Aston, soprano; Sara Cubarsi, violin; Andrew McIntosh, viola; Scott Worthington, double bass; Allen Fogle, french horn; Matt Barbier, euphonium; Luke Storm, tuba; and Nicholas Deyoe, conductor. Co-presented with Microfest. 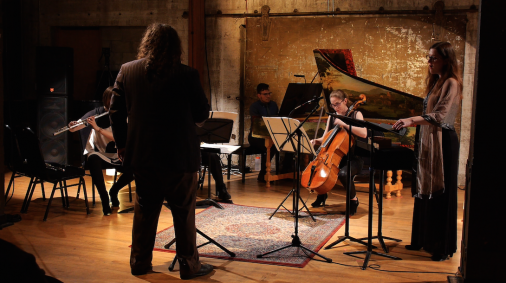